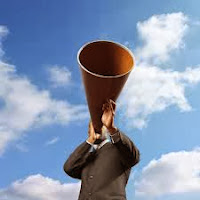 Derek Chappell. Besides being an Attorney and a die-hard Kansas Jayhawk basketball fan, he’s the ‘The Voice Of Your Business’; and definitely one of many talented Voice-Over professionals with a big online presence and a big heart. He’s known for bringing people together and ‘Using Social Media to Educate & Entertain about the Profession of VoiceOver'. He’s all about using his clear, comfortable and consistent  voice to successfully promote people's businesses. And he’s also what I call, a rally-cry guy. He rallies, encourages, motivates and supports people in order to build strong communities. He’s been doing this for quite a while now so it’s definitely time to hoot and holler over him with a Debby Barnes Voice-Over Rah-Rah!

The Voiceover Blog Talk he curated in order to ‘Scoop’ other talent’s views about the Voice Over industry is chock-full of insightful information. It also gives myriad others an opportunity to share their lives and their stories with each other. He recently raised-up a Google+ Voiceover Blogs community that offers fellow VO bloggers yet another stimulating forum of exchange. (…and there’s nothing quite like ‘comparing notes’ on issues we’re all thinking and/or working through, is there?) Allow me to give him a special mention for compiling his 'All Top Voiceover Blog Posts' each week. What a boon. And his Guest Blogger posts are a must-read as well.
We're also grateful for the timely article he just wrote: ‘Cast of Global Voice Talent Produces PSA For Philippine Relief Effort’.  It's an enlightening, powerful and urgent donations appeal on behalf of those suffering in and through the devastation and aftermath of the Philippine’s, Typhoon Yolanda.
Derek writes about the life-changing affect this had on Pocholo De Leon Gonzales, in particular, (…one of our fellow Voice Over Talents). According to Derek, Pocholo felt compelled to help his people by using the resources he already had available to him through his VO community. So he and his VO ‘brothers’ (Herb Merriweather, Andy Boyns and Mehmet Onur) got busy as ‘The Voice Of Help’ in order to produce an effective Public Service Announcement (PSA) video  message. They were determined  to open the eyes of the world by informing them about the intensity of the destruction. Pocholo explains, "I believe that as a voice over artist in the Philippines and the only one who's doing this, I have the responsibility and the will to do such a PSA to inform the world about what happened in my country, how the worst typhoon in the world affects my countrymen, and how the other people can help.”
There’s nothing quite like a catastrophic event somewhere else to make us feel helpless where we are, is there? We don’t think we can make much of a difference either, but Derek reminds us, ‘…there’s also strength in numbers. And there’s strength in the VO community, which time and time again has shown the willingness to get involved, roll up the sleeves, and support those who need it, with the time, talent, and resources we’ve been blessed with.’
He’s spot-on when urges us to: ‘Encourage the people of the Philippines and the aid crews on the ground, by showing them there is a global community who cares, and is willing to do what it can with the resources it has, to spread the word and aid in the relief efforts.’ (Surely, it's never too late to spread the word, pray and give what we can.)
And so to our rally-cry guy, Derek; and to Pocholo, his VO buddies, and all of those who stay mindful of other peoples highest good. Rah-Rah!
Read it through the link below. See and share the PSA video as well.

Give his VO site a stop, look and listen.